When you have freedom to create as an Initiator, you bring originality and inspiration forward. You are here to initiate, get things started, “get the ball rolling” and bring new ideas and concepts into the world. You have an incredible gift and ability to act independently, to initiate action, and impact others.

The Initiator - when using their energy correctly, is here to 'get things started'. They are not here to 'do the doing' though and need the other types to bring things to fruition.

They have the ability to act independently, to initiate action and to impact others. They may be perceived as unpredictable making others uncomfortable which can and often does lead to others trying to control them. Innovators are at ease with solitude and manifesting what they want for themselves. This is their natural way and they don't require outside assistance.

When controlled by others, they can become very angry, either with others or turn the anger inward on themselves. Their interactions then become either angry and rebellious or passive and accommodating. What they want most is to know whether anyone will respond or be enlivened by their impact. This underlying pressure to impact, to make things happen is the key to fulfilling their purpose.

If they are unaware of their Career Type, they may find themselves feeling angry more often than not and feeling resistance  from everyone around them. It can often make them feel like misunderstood outsiders. They are highly sensitive and can feel this resistance in many forms and feelings depending upon circumstances. Rejection, lack of respect, lack of politeness, trying to control them, trying to stop them, not informing them, telling them what to do. Threatening them if you don’t do that then I’m going to do this -  ultimatums feel terrible for them as they only want to be left alone to do what they want when they want to do it.

The simplest way for Innovators to avoid feeling this resistance is to first 'inform' others before taking action or speaking. This does not come easily to them as they are designed to be very independent and focused on doing their own thing. They are often confused about why anyone would be interested in what they are doing as they go about their business. Since their energy is pushing outward, it impacts everyone around them. Like a glass of water submersed in a bowl of water forces the water away if directly set in the water. Yet if the glass is 'tipped' on its side, the water surface tension is broken and the water flows easily around the glass. When they 'inform' others (or as a child, learn to ask permission), before they move into action, this has the effect of 'tipping' the glass - 'tipping' others off to their movements thus releasing the pressure and tension allowing the conversation or action to flow.

Innovators also need to be informed about what is happening around them especially if it affects them. This will help them feel seen for who they really are and if they aren't informed and are surprised with information, they may be angry that they didn't know sooner.

How the Career Types Work Together 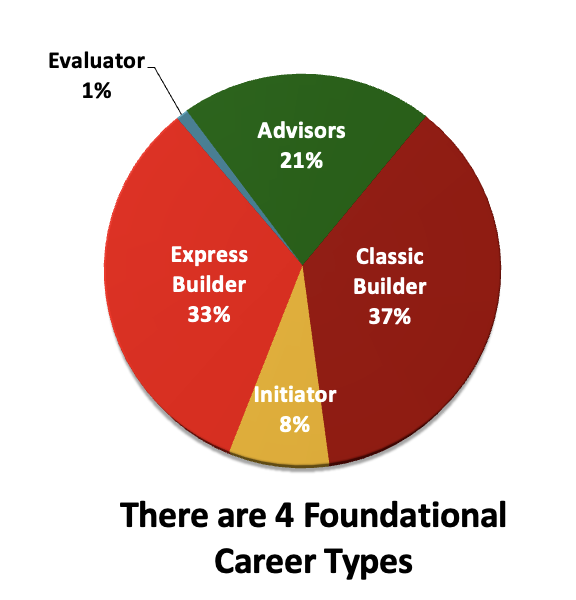 Initiators have a vision for the world and pick up subtle information from the environment around them and are then 'moved' by what they sense and need to inform those around them about what needs to be done. Their energy is 'moved' to impact those around them 'knowing' THIS is the thing that needs to be initiated for the benefit of all. They can't push this and may have to inform again at different times until others are ready and able to 'respond' to the initiation and have the energy to do the necessary work as the Innovator doesn't have the energy to carry the effort through to the end.

When an Initiator is feeling angry, it is an indicator that they are not 'informing' others about what they are doing and are meeting resistance and or feeling rejected. Or it could be that those around them haven't informed them of vital information, meaning any information you have to share that affects them. They will feel very left out if they are not informed and this is another way they can feel rejected or ignored.

Their natural healthy state is to find peace. They enjoy time alone as it helps them stay in touch with themselves and unwind the energy they pick up from others.

When Initiators are not aware of how their energy signature works, and they're meeting continual resistance they can become 'compliant'. Many of them turn their anger inward and hide their true impact for fear of further resistance.

This is like watching a powerful black panther become someone's mollified pet cat dressed up in silly clothing in order to reduce their impact and 'fit in'.

If you or someone you know is an Innovator, explore our other Free Resources to learn more.

Read these Initiator stories in our Free Resources:

If you're ready to become informed about the BG5 System and discover your uniqueness, consider taking our Foundation course.